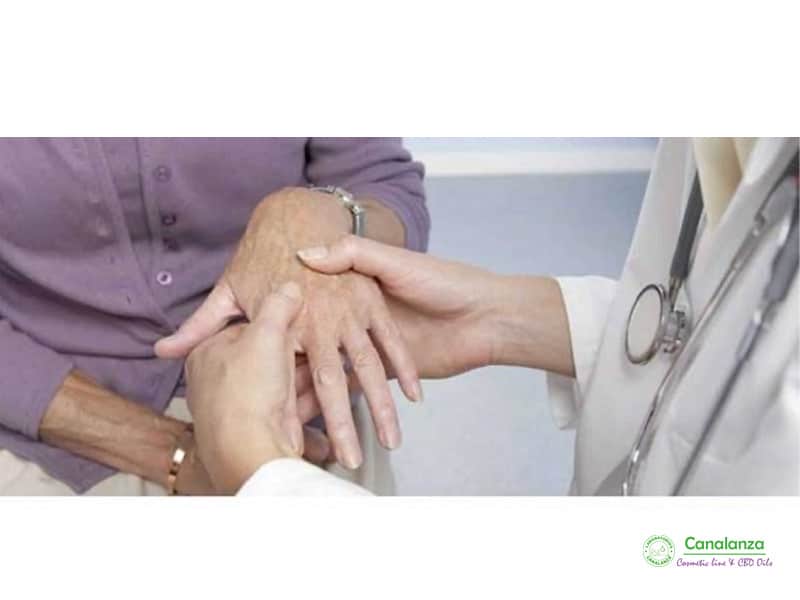 How can CBD help with Reiter’s Syndrome?

Reiter’s syndrome is a form of arthritis that produces pain, swelling, redness and heat in the joints. It is one of a family of arthritic disorders affecting the spine. Reiter’s commonly involves the joints of the spine and the sacroiliac joints areas where the spine attaches to the pelvis.

In 1916 Hans Reiter, a German military physician, described the disease in a World War I soldier who had recovered from a bout of diarrhea. Dr. Reiter described three characteristic features of the disease: inflammation of the joints, urinary tract and eyes. More recently doctors have recognized a fourth major feature: ulcerations of the skin and mouth.

Reiter’s syndrome often begins following inflammation of the intestinal or urinary tract. In susceptible people this inflammation sets off a disease process that involves the joints, eyes, the urinary tract and skin. A brief description of how each of these may be affected is below.

Not all of these symptoms occur in every person with Reiter’s syndrome. Nor do they all occur at once in the same person. Symptoms of the disease tend to come and go but not always at the same time as the worsening of the joints.

When Reiter’s syndrome first begins it is characterized by a great deal of swelling and pain in the affected joints. Joint involvement is usually asymmetric (meaning it affects different joints on opposite sides of the body) and confined to a small number of joints.

Often the spine sacroiliac joints and large joints of the legs are involved. A few small joints in the toes or fingers also may be affected. In addition people with Reiter’s syndrome may experience inflammation in areas where tendons connect to bones as in the heels.

The joint pain of Reiter’s syndrome tends to follow one of two courses. A small percentage of people have continuing joint involvement that is constant. Most people however have periodic attacks of arthritis that last from three to six months.

In each attack the general pattern and severity tend to be similar to previous attacks with a small number of joints–often different joints–involved each time. After the first attack almost half of those with Reiter’s will never have another attack.

Statistics are similar after the second attack. But with subsequent attacks it is more likely that the disease will become a permanent form of arthritis.

In most cases the joint inflammation that is associated with Reiter’s syndrome does not lead to permanent joint damage or disability.

About 40 percent of people with Reiter’s experience conjunctivitis, an inflammation of the membranes under the eyelids early in the disease process. Conjunctivitis may be so mild that it’s hardly noticed or it may be painful and accompanied by secretions. Fortunately it usually is short-lived and rarely causes permanent damage.

Later in the disease process about five percent of people with the disease develop iritis, an inflammation of the iris and deeper tissues that causes the pupil to open and close. Iritis is a serious condition; immediate medical attention by an ophthalmologist is required. If it is not promptly treated, scarring may occur and affect vision.

The most common form of urinary tract involvement in people with Reiter’s syndrome is urethritis, an inflammation of the urethra or tube that drains urine from the bladder out of the body. The typical symptom of urethritis burning during urination may or may not be present.

In men Reiter’s often is accompanied by a discharge from the penis. The discharge usually is painless and carries no bacterial infection. Inflammation also may appear in the prostate gland of men with Reiter’s. Cystitis which is an inflammation of the bladder is a common form of urinary tract involvement in women with Reiter’s syndrome.

In most cases these problems will go away on their own and cause no permanent damage.

People with Reiter’s often experience small hardly noticeable sores on the soft palate or back of their throat. Painless superficial sores on the penis occur in about one-third of men with Reiter’s syndrome. Some women with the disease develop sores on their external genitalia.

In addition people with Reiter’s syndrome may experience a rash on the soles of the feet made up of thickened and over-pigmented outer layers of skin. This type of skin involvement occurs less commonly on the palms of the hands and on other areas of the body.

The direct cause of Reiter’s syndrome is not known; however both genetic and environmental factors are involved. About 75 percent of people with Reiter’s syndrome have a gene called HLA-B27. HLA-B27 is one of a family of genes that play an important role in the body’s defense against infection.

It is important to note that having the HLA-B27 gene does not mean you will develop Reiter’s syndrome. Approximately eight percent of white Americans and two to three percent of African Americans carry the gene; the majority of them don’t have any form of arthritis. Having the gene however may predispose certain people to react to an infectious agent that enters the body through the urinary or intestinal tract.

When people get Reiter’s syndrome through inflammation of the intestinal tract it usually follows a bout of diarrhea caused by eating foods with bacteria such as salmonella shigella campylobacter or yersinia. There is speculation that the inflammation in the urinary tract is caused by a variety of different organisms but no specific infectious agent has been identified.

Some researchers have found fragments of infectious agents in the affected joints. The arthritis appears to result from an immune or inflammatory reaction to the fragments. Exactly how joints and other organs become involved after the initial infection is not known.

How can CBD help with Reiter’s Syndrome?

One of the major symptoms of reactive arthritis is pain experienced by the sufferers on a daily basis. This causes a lot of discomfort and also interferes in the patients day today activities.

NSAIDs are commonly prescribed to try and reduce the inflammation and pain.

Although they sometimes work, they can cause constant damage to internal organs in addition to side-effects such as nausea, diarrhea and the risk of dependency. For this, CBD comes in as a much safer solution with no serious side effects and yet effective for relieving pain and inflammation.

While most people are familiar with the ability of CBD to combat pain, most people do not realize that it has also shown to be a very effective anti-inflammatory drug. CBD oil can help reduce the inflammation caused by Reiter’s syndrome without causing additional injury to the digestive tract or the internal organs of the patient, as is the case with conventional NSAIDs.

PrevPreviousHow CBD can help for Muscular Dystrophy.
NextCBD for HypertensionNext