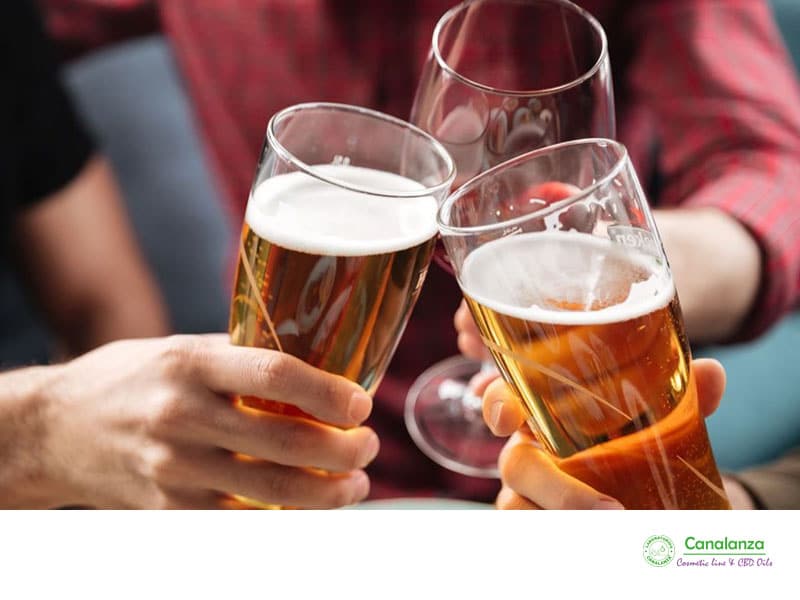 Is it safe to take my CBD and drink alcohol after?

This may be a question that you have been asking yourself since you started using CBD Oil. The short answer is yes, however, they react to each other.

Some experts believe that because both substances have similar sedative effects, they could actually amplify each other, making the overall experience more intense. Let’s take a closer look.

If you plan to go out for a few drinks this weekend, can you get your daily dose of CBD? Based on medical research, taking CBD under the influence of alcohol appears to have limited compounding risks.

A 1979 study published in the Journal of Psychopharmacology observed very little difference between test subjects who were given CBD and alcohol, and those who were given only alcohol. The study found that both groups demonstrated “significant deficits in motor and psychomotor performance” and “overestimations of time.” In other words, both groups appeared similarly inhibited and handicapped.

However, a difference became apparent when the researchers took a closer look at the blood samples from both groups. Despite their similar levels of impairment, the group that received both substances had markedly lower levels of alcohol in their blood.

While CBD can lower blood alcohol levels, it is not safer to act rashly, consume more alcohol, or operate any type of motor vehicle while under the influence. As noted in the study, you can expect alcohol to affect you in the same way, if not more, by consuming it at the same time as CBD. Cannabidiol simply does not mitigate the risk of negative side effects or consequences of alcohol consumption.

What actually happens when you mix the two?

While CBD doesn’t have mind-altering effects like its cousin THC, its mild sedative effects are still mixed with alcohol in a way that amplifies them. In general, you should notice that the effects of alcohol are more intense if you have consumed CBD within 4-8 hours.

The interaction of the two before that time will result in greater inhibition, greater loss of control, and greater loss of motor coordination. Simply put, the effects of consuming both at the same time will be more intense than those produced by just consuming one.

If it does. Researchers believe that CBD can help mitigate some of the damage alcohol causes in the body. Animal studies suggest that CBD offers protection against neurodegeneration and liver damage.

Research published in the journal of Free Radical Medicine and Biology studied the effects of CBD on alcohol-induced liver steatosis, also known as fatty liver disease, in mice. Researchers found that CBD could prevent alcohol-induced acute liver damage, potentially due to its ability to prevent increases in oxidative stress and decreases in autophagy typically caused by alcohol.

Additionally, researchers believe that CBD may help with alcohol use disorder (AUD) and alcoholism. A 2019 review of animal and human studies found that CBD was able to reduce “stimulus-triggered and stress-triggered alcohol-seeking” behavior.

Administration of CBD also resulted in a decrease in “withdrawal-induced seizures” and an improvement in the ability to delay reward. It appears that CBD can help decrease physical and mental triggers that lead to alcohol cravings and relapses.

Drinking alcohol is a social pleasure that we all indulge in from time to time, yet it is very dangerous to become addicted. Also, for that reason, we cannot recommend that any amount of alcohol is good. That being said, if you are going to have a few drinks with friends, there really is no problem if you take your CBD OIL Lanzarote beforehand, just be careful and drink responsibly.

We recommend 20% CBD oil with 0.1´8% from Laboratorios Canalanza